I was DOP, producer and editor for the launch video of the Behringer DM12 augmented reality interface. This amazing new technology was showcased at the Sheffield SynthFest.

SynthFest is an annual event for synth enthusiasts. The event features new developments in technology from all the major manufacturers, and many of the smaller, emerging companies. I was tasked with demonstrating the interface through video and collecting opinions and first thoughts of users of the interface.

The Behringer stand allocation was small, around 8 ft wide and 4 ft deep on a busy thoroughfare. There was limited space for lighting and cables due to H&S concerns. We needed to fit two synths, a computer and two sets of Hololens kit along with about 10 people into the tiny space. I managed to squeeze in a Litepanels Astra LED panel behind the synths but that was about it for the lighting.

The camera I used was a Canon C100 Mk2 with Canon 24-105 L series lens. The camera was built onto a hand-held rig, and audio from the interviews was captured with the Rode NTG-3 shotgun mic and Sennheiser EW-100 wireless hand-held mic. Interviews were conducted by the synth developers and I manned the camera. There were some challenges with the house lighting, as there always are in venues such as this. In the roof were the dreaded daylight fluorescent mixed with some tungsten lighting as well. White balance is always a challenge, as is matching up the Litepanels Astra.

We wanted to shoot people using the interface but this posed a problem in that unless someone wears a Hololens, you do not see the interface. We solved this issue by another person hooking in to the system with an additional Hololens. The second Hololens would view the first user of the interface (and synth) and be able to see the same output. This feed was then recorded into the system at fairly low bit-rate and 720p due to the limitations of the system. The resultant footage would then be edited into the final production later.

This may all sound a little confusing so I had better explain a little about the interface. The Behringer DM12 is a complex analogue/digital synthesizer that may be controlled from the front panel, by an external computer or tablet, or with the newly developed augmented reality interface. The AR interface projects the controls of the synthesizer into the field of vision of the user when wearing a Hololens. The user may then gesture with their hands in mid-air to alter the controls, and thus affecting the sounds of the synth, and the sequencer controls. It’s all quite Star Trek really, and just like sunshine indoors, it’s the future. 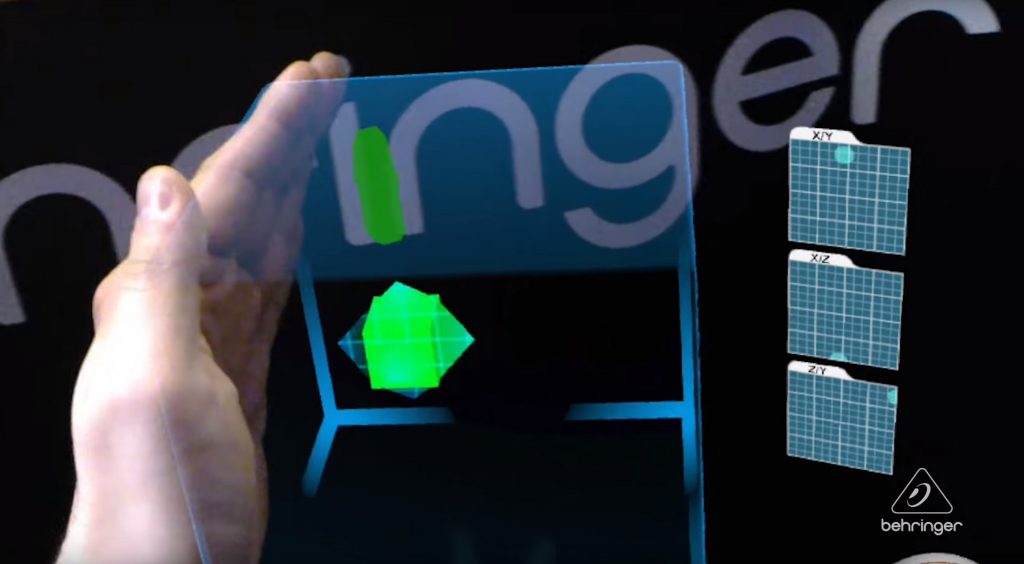 Pete Sadler is the top dog of the Behringer Dm12 development team and he introduces the video, followed by the opinions of various unsuspecting “synth fiddlers” that we captured throughout the day. During shooting we were collecting some great feedback re the interface and some good sound bites to use later.

In the edit suite this was a fairly straightforward edit. The developers got the Hololens footage to me asap and that was up-scaled from 720p to match the 1080p of the Canon output. Then it was just a case of picking the best interview snippets and matching up the Hololens outputs of that particular user. Overall I was happy with the result with the Canon performing really well once again, producing a lovely image. The edit was live within a day.

As an additional production, I needed to shoot a synth patch demonstration by Ben Crosland. Ben had been commissioned to produce a whole bank of patches that would be shipped with synth when it hit the shelves. I wanted the audio to be as pure as possible so took a stereo output from the synth on 1/4 inch jacks into the two XLR inputs of the Canon C100 and set to line level. Ben jumped in front of the keyboard and demonstrated the patches while I hit record – simple. Later on I would shoot the synth panel in studio conditions and overlay this in the edit so that viewers had a clear view of which patch Ben was demonstrating.

Check out our post featuring JD73 playing the synth